Competition is a powerful tool for a traditional Martial Artist. My name is Jason Makris I am 26 and I have been training traditional Pencak Silat from the time I was 11 years old, however I have only recently begun competing in the sport martial arts world. I, like many I have talked to believed that martial arts for sport competition were “fake” and would build bad habits for the street and real-life application. I could not have been more wrong, the experiences, training intensity, health benefits, and most of all learning what techniques and skills I could pull off against a fully resistive and combative opponent. Sport has helped me take my martial arts from the realm of theory to the realm of tested reality.

I recently competed in my first international level competition in Belgium, the training intensity leading up to a goal like that alone is enough to supercharge a martial artist’s skills and stamina. Although watching the pounds come off and seeing my posture improve, and feeling my speed increase  has been great for my self-image, it has been the mental and spiritual aspects of the competitive level training that I have found most valuable. The process of pushing out to the deep end of training, pushing yourself to the limit on a daily basis is akin to swimming out into the breakers — where the water is the most turbulent and most challenging.  Every obstacle, every new skill to learn, every bruised ego, and every ache and every pain is not a one-off experience. When training seriously, these show up like wave after wave forcing you to decide to keep swimming or to die from drowning. For years my teachers in Pencak Silat have repeated this advice “Bukan berusaha menjadi jago tapi jago dalam berusaha” — “Don’t strive to become a champion.  Become a champion through striving”. I always took this expression for granted. Through sport, I have now learned the value is in the struggle to overcome these obstacles and not so much in the success of overcoming them.

When I began training with a focus in Sport Silat I weighed 230 lbs and not in a big, strong kind of way.  The traditional theory-based training has served me well. It has built understanding, skills, and a mental acuity that certainly helped me, but without an explicit challenge, I had let myself go. When I added sport (not replaced traditional), I began to see my health, both mental and physical, skyrocket. By the time I weighed-in for my fight I was 183 lbs and feeling more energetic, flexible and sharp than I had in years. My traditional forms started to “snap” and my motion became more fluid. My applications had a more realistic flare as I had tested them with someone trying to beat me, not just a partner helping me to train. The mental toughness that had been built from 2-hour training sessions before work and 3 hours after work every day made me feel ready to face anything the day could throw at me.

In short, traditional martial arts gave me the base, the skills, and the knowledge I need… Sport gave me the venue, the motivation, and the target to dig into my skills, look past the pride in my system and look critically at my own ability and to strive to dive deeper into what makes a great martial artist. I strongly urge everyone who has ever asked themselves “could I pull this off in real life?” to try competition and test it. More importantly test yourself. Be ready to fail… a lot and then every so often be prepared to achieve things you didn’t ever think you could do. 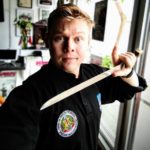 Jason Mason started studying pencak silat when he was 11 years old.  His lifelong passion has blossomed into a career where he manages and teaches at the Inner Wave Martial Arts Academy in Loveland, Colorado.

He recently participated in the Belgium International Pencak Silat Championship 2019, where he medaled with a Bronze in Tanding (Sparring).

Away from the mat, Jason loves to travel, hike, camp, and cook with his partner Morgan.