As a newly appointed coach for Sport Silat, I often hear the question, “Aren’t you worried that Sport Silat will eventually destroy traditional Pencak Silat”? My answer to this: Sport Silat is to be used as a tool. It is not a replacement for traditional teachings.

To compete at a high level an athlete needs endurance, speed and strength. For many of us traditional martial artists, we tend to ignore athleticism and instead focus on defending ourselves by developing confidence and fluency in our technique. The rules of Sport Silat forces the practitioner to focus more time on physical training, but this does not mean technique should be thrown away. Similarly we as a Silat community should think of Sport Silat as another tool for self-improvement and martial art development. Ideally a participant will have a background in traditional Silat training before participating in Sport Silat, but we should also think of Sport Silat as a way to expose newcomers to the wider set of tools offered by traditional training.

Still, many folks raise concerns that when a traditional martial art becomes a sport it loses its traditional values and effectiveness. Some argue that training for competition builds bad habits. Others say that focusing on winning corrupts the spirit and throws away the heritage of the art. All of these arguments can hold true, if one only practices the sport aspect and allows competition to fully replace traditional training. When conducting traditional practice we aspire to stay pure and true to the traditional teachings. Even better if one can stay true to these teachings even when participating in Sport Silat.

Most traditional martial arts place heavy emphasis on virtues and development of character. Common teachings include lessons in humility and in contributing to one’s community. Take any traditional pencak silat style, and you will see how its practice ties directly to the the values of the communities in which it evolved. When people learn traditional Pencak Silat, they develop pride in their own style, their lineage and their jurus (aka forms or katas). For many the jurus highlight what their style considers important whether it be footwork, strength, strategy, etc… This is an expression passed down from teacher to student over hundreds of years.

Now contrast this to the development of popular martial arts sports in Southeast Asia, especially Pencak Silat. Competition rules and standards were created anew in modern times by committee to reflect the similarities across many styles and geographies. This raises the question: “how can we preserve the richness and spirit of silat when one has to follow a standard?”

My advice to traditional practitioners entering into Sport Silat: start with a clean slate.  Learn a new set of unfamiliar forms and rules. Some motions will feel awkward or unfamiliar and will not feel the same as when learned from one’s mother style, but by surrendering to this new challenge the practitioner will compel him or herself to be humble. Memorizing Sport Silat’s jurus/forms is not just a rote exercise, it is an opportunity to reevaluate your understanding of your traditional teachings.

As I went and continue to go through this process I have discovered my own connections between the jurus of Sport Silat and the teachings of my ancestors. Jurus Tunggal (Sport Silat’s solo form) consists of 100 motions and the rules specify it should be performed in three minutes. As a traditionalist, the number three embodies learning about unity of the mind, the body, and the spirit. Learning Jurus Tunggal’s 100 motions taught me lessons in putting aside differences and focusing on similarities and mutual goals. I’m not just talking about Silat styles, but about life in general. Every time we compete, we are learning to conduct ourselves with sportsmanship and working to build a network of practitioners. By putting aside differences to pursue a common interest we fill the larger Silat community with unity and friendship. 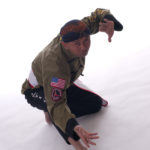 Daniel is head instructor at the Inner Wave Martial Arts Academy in Loveland, Colorado and one of the primary caretakers of  Pencak Silat Inti Ombak.