“Smack. Smack.” That was the sound that resonated from my opponent’s body and head as I landed a double round kick, one to the stomach and one to the head. Both kicks landed with speed and precision. “Point,” yelled the head referee. We broke apart and that was enough to end the point fighting match. Five points scored and that signified my second win at the 1990 All American Open Tournament held in Denver, Colorado. There would have to be a couple more wins before I placed. My next opponent was a seasoned kenpo fighter and a school owner from Colorado Springs. I was in my first year at the university and barely nineteen years old. I knew this was going to be a tough match. I stared my opponent in the eyes as we bowed, remembering Bruce Lee’s advice to “never take your eyes off your opponent, even when you bow.” It was his gritty kenpo techniques versus my athletic tae kwon movement. In the end he edged me out by one point when the timer went off. I was eliminated from the bracket, no second chances. With my head held low we hugged and my opponent beat me that day. Or did he?

Outsiders looking in may think competing in combat sports like UFC, karate, judo, jiu-jitsu or silat is ego driven. Some may think it is a watering down of traditional techniques, made safe for the masses. Others believe that every combat sport is simply human cockfighting with two aggro fighters going at it, vying for dominance. As a life-long competitor and practitioner of combat sports (namely Tae Kwon Do, Karate, Muay Thai and Brazilian Jiu-Jitsu- and maybe one day Silat), I would like to offer a different perspective. There are three main reasons to consider when supporting or competing in a combat sport like silat. Of course there are more, but these are the three I feel are most important to anyone’s growth- not only a martial artist, but a responsible citizen.

Back to the match from the opening paragraph; well, in the 80’s and 90’s, head gear was not mandatory and groin shots were legal at open tournaments in the cowboy state of Colorado. Needless to say, the rules do not bode well for the high kicking Korean-style artists, such as your humble scribe. I lost the above match to of all things, a groin kick.

Frustrating? Yes! Unskilled? Hell yes, but effective. From that point on, I trained to check my opponent’s movement with a low stiff leg technique of my own, thus pinning their leg to the ground, or faking a bunch before going full-on “Bill ‘Superfoot’ Wallace” on them. I had learned to adapt, improvise and overcome. This teaches students and practitioners that when you encounter an obstacle, you can overcome it. I may have lost the match, but I learned a valuable lesson and became better. This is the true spirit of competition, to make more resilient people and give them tools to succeed in life. Speaking of life skills, respect and humility are something to have handy- which brings us to point number two.

For every outspoken Conor McGregor in the UFC, there are easily ten others that are respectable and humble. Sure, people like McGregor, Ronda Rousey and Chael Sonnen get the spotlight, and that may lead the masses to think all MMA fighters are brass and arrogant. But the fact remains, the majority of martial artists are respectful and humble (including UFC fighters). How do I know? My BJJ teachers compete in the UFC and Bellator MMA promotions. They are both as deadly as they are compassionate and humble. In fact, the majority of competitors I have met are all very humble. Why? This is because almost everyone who competes will taste defeat at some point in their career. (I say almost, because there is a few- emphasis on few- outliers who may not.) Combat sport practitioners get their rears whooped in practice, on a regular bases. They know there may be someone better. Even when they reach the top as a champion, it is common knowledge that winning or losing (at the elite level) is often balanced on the edge of blade- in other words it can go either way on any given day.

Contrast this to some traditional martial artists whose techniques always work on willing students or partners. These practitioners have never tasted defeat. They feel they are invincible. The enlarged egos can create tension and splintering in the arts, which brings us to the third point.

Compelling Combative Sport Reason Three: Community- A Group Who Kicks Together Sticks Together

Combat sports offer a chance for people to come together as a community to share something they love. These communities often grow stronger because of competition. I have observed first-hand the fracturing and animosity that brews inside traditional arts (which often shun competitions). One branch of the art may say, “my lineage is more deadly.” Another branch will claim, “my lineage is more pure and authentic.” While another branch within that style states, “you both are clueless because we have more forms and techniques than anyone.”

And round and round it goes. Faces turn red, lines are drawn and woe is to anyone who tries to mingle between the factions. In contrast, this rarely happens to the combat sport communities I have been involved in. If a Brazilian Jiu Jitsu or Muay Thai teacher has a special way of doing things. Fine. Go ahead and try it out in competition. Any animosity is left inside the ring. No bickering, huffing of chests and the community remains intact and respectable.

Starting with pankration and wrestling, combative sports grew to become a world-wide phenomenon. Sport silat is already established in Asia and Europe. Today, silat in the USA is taught primarily as a traditional art with few sport oriented teachers. With the USSSA and head coach guru Daniel Prasetya leading the way, it will be exciting to see Americans getting on board with sport silat competition. Soon the USA will be able to demonstrate their talent, innovation and spirit to the rest of the world in this exciting sport.

Personal growth, respect and a stronger community are only three good reasons to participate in combat sports. Do you have others? Please share your thoughts with us, or email the author through his site or facebook page. 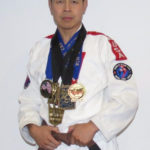 Dr. Conrad Bui, is a San Francisco based doctor of chiropractic and frequent contributor to Recoil, Concealment and OFFGRID magazines. As an avid combatives sports competitor, he has won state and national titles in the point tournament circuit during his teenage years. His love for competition culminated in winning gold medals in the featherweight and absolute (unlimited weight) brown belt divisions at the 2017 Brazilian Jiu-Jitsu American Cup. A longtime student and teacher of martial arts, he is a certified full instructor in Silat Serak, Kuntao Silat deThouars, Kali, Jeet Kune Do, Ba Gua and Muay Thai. He also holds a fifth degree black belt in Tae Kwon Do and a black belt in Brazilian Jiu-Jitsu.